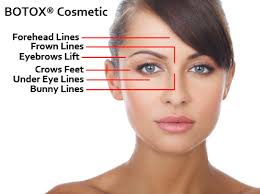 Guess you would be surprised at how many celebrities admit to using Botox, here are just a few:
Courtney Cox:
“Sometimes I use Botox,” the “Cougar Town” actress told Marie Claire in 2010. “Compared to most, I use it very sparingly.” Cox continued: “One time, I did too much though. I feel weird if I can’t move my face, and that one time I overdid it, I felt trapped in my own skin. I don’t have a problem with any of that stuff; if it makes you feel better about yourself, and it’s done properly, then fine.”

Simon Cowell
“I’ve had Botox, but not in an obsessive way,” the “X Factor” mentor told the Daily Mail in 2007. “Then again, every guy I know who works in the city has had it now.

Jenny McCarthy
“I go every two months,” she told People in 2008. “My tricks are, I get Botox in my forehead — I just have my doctor do a little … if you overdo, it looks bad.” In 2013, “The View” co-host revealed her stance hadn’t changed, telling In Touch: “I am Team Botox.”

David Hasselhoff
“I have had Botox, everyone has,” David Hasselhoff bluntly admitted to People in 2006. “It’s a shot. It takes out the frown. I haven’t had that in a year. I take pride in that. I look great.”

Cindy Crawford
The supermodel discussed her Botox views with Ladies Home Journal in 2010: “I’ve tried Botox. Plastic surgery is really scary, but as long as you don’t use these things to change your face, I think it’s OK.”

Kelly Ripa
42-year-old talk show hostess Kelly Ripa has proudly admitted to getting Botox in both her eyelids and her armpits.

For more information on Botox in Toronto, visit https://www.lastinglooks.ca/botox-toronto/